WHY ORT SOUTH AFRICA IS INVESTING IN CODING

WHY ORT SOUTH AFRICA IS INVESTING IN CODING 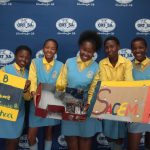 There are few schools in South Africa that offer coding as extra curricula and those that do are mostly independent schools. In previously disadvantaged schools, coding is almost nonexistent. ORT SA, an accredited non-profit educational organization, took up this challenge and in 2016 started coding clubs in Ivory Park and now has fully fledged clubs running in six primary and six high schools. “Ten-year olds have made the most wonderful projects including a digital thermometer, a security system and a digital music box,” says Ariellah Rosenberg, chief executive officer at ORT SA.

ORT SA is now broadening its reach and will be running coding classes at the new Curtis Nkondo School of Specialization in Soweto. Gauteng MEC for Education, Panyaza Lesufi said at the GDE Legotla recently, “We have to be in the centre of the 4th Industrial Revolution.” This is exactly what ORT SA is doing. The programme at Curtis Nkondo is funded by the Support Teacher Empowerment Trust.

While fulfilling its vision of ‘Educating for Life, ORT SA’s mission is to make people employable. “Kids who have developed programming and coding skills from a young age, should easily be able to enter into tertiary education and future jobs. Learning to code is vital in the increasingly digital world we live in and this is what ORT SA is doing,” said Rosenberg.

“ORT SA is a very exciting place to be,” said Ariellah Rosenberg CEO of ORT SA.  “With the 2016 launch of the ORT SA Academy, the organization has become a vibrant hub for the promotion of  21st century skills. Our mission of ‘Making People Employable’ has become a reality.”

About the Author: Jonathan Zwick

0
0
Your Cart
Your cart is emptyReturn to Shop
Continue Shopping
This website uses cookies and third party services. Ok